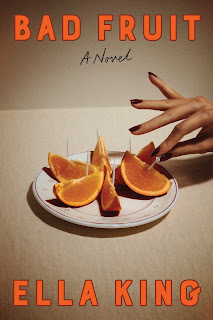 About Bad Fruit by Ella King

Just graduated from high school and waiting to start college at Oxford, Lily lives under the scrutiny of her volatile Singaporean mother, May, and is unable to find kinship with her elusive British father, Charlie. When May suspects that Charlie is having an affair, there’s only one thing that calms May down: a glass of perfectly spoiled orange juice served by Lily, who must always taste it first to make sure it’s just right. As her mother becomes increasingly unhinged, Lily starts to have flashbacks that she knows aren’t her own. Over a sweltering London summer, all semblance of civility and propriety is lost, as Lily begins to unravel the harrowing history that has always cast a shadow on her mother. The horrifying secrets she uncovers will shake her family to its core, culminating in a shattering revelation that will finally set Lily free. Beautiful and shocking, Bad Fruit is as compulsive as it is thought-provoking, as nuanced as it is explosive. A masterful exploration of mothers and daughters, inherited trauma and the race to break its devastating cycle, Bad Fruit will leave readers breathlessly questioning their own notions of femininity, race and redemption.

Banshee and You by Cam Alabastor