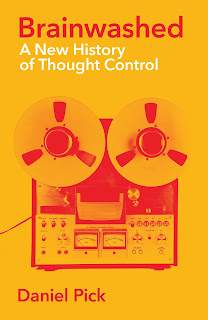 About Brainwashed by Daniel Pick

In 1953, at the end of the Korean War, twenty-two British and American prisoners of war were released – and chose to stay in China. The decision sparked panic in the West: Why didn’t they want to come home? Why did they prefer to stay with their captors? What was going on?

Soon, people were saying that the twenty-two POWs had been ‘brainwashed’: a new word for an idea – that it is possible to control or change someone’s mind from the outside without their permission – that had been around for centuries. Flourishing in the 60s and 70s, an era of Cold War paranoia and space-age experimentation, brainwashing quickly permeated Western society, appearing in everything from Bond films to CIA experiments to the assassination of John F Kennedy. Today, we talk of being ‘brainwashed’ by advertising and television, even as our fears of ‘radicalisation’ are stoked by the media. But what is the truth behind brainwashing?

Here, psychologist and historian Daniel Pick delves into the mysterious world of mind control in the twentieth and twenty-first centuries, from The Manchurian Candidate to ISIS. Mixing his own case studies with historical and psychological insights, he will bring you on a journey into the bizarre and fascinating world of mind control.

Bonds of Chaos by Zack Argyle