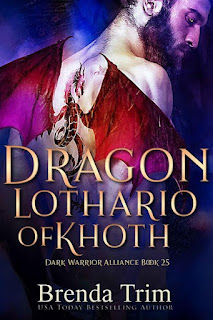 About Dragon Lothario of Khoth by Brenda Trim

As a dedicated dragon knight of Khoth, Blaine spends his days fighting the Unseelie and guarding the royal family. But his nights are filled with passion and pleasure as he pursues every female he can manage on his mission to become the most sought-after lover in the realm.

When a disturbing accusation puts one of Blaine’s trainees in the hot seat, he must give up his personal time to investigate a brutal attack on the vampire princess. Hiding his true nature, relying on the powerful Rowan sisters, and facing the daughter of his sworn enemy are only a few of the challenges he faces as he attempts to uncover the truth. But as the mystery deepens and Blaine learns that dragons are being imprisoned by the King, he’s no longer just searching for answers. He’s on a quest to free the captives and stay alive, all while trying not to succumb to his desire for the one female that is as likely to kill him as she is to kiss him.

Dazed by the Gods by Bianca Riley