About Kissing Games by Evie Alexander

When actress Valentina Valverde arrives in Scotland to film Braveheart 2, she’s at breaking point. Driven by demons, she’s worked tirelessly since she was a teen. But she can’t stop now: everyone she loves depends on her. Yet despite all the glitz and glamor, Valentina can’t shake the feeling that she isn’t really living.

Bodyguard Charlie Hamilton’s lived too much. With looks and charm, he should have it all. But he’s broken. Estranged from his family, sacked from his job and with nothing left to lose, he flies to the Scottish Highlands to help his best friend protect Kinloch castle from a crazy Hollywood film crew. 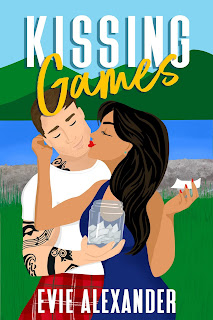