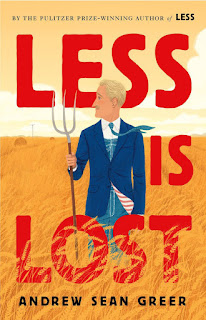 About Less Is Lost by Andrew Sean Greer

For Arthur Less, life is going surprisingly well: he is a moderately accomplished novelist in a steady relationship with his partner, Freddy Pelu. But nothing lasts: the death of an old lover and a sudden financial crisis has Less running away from his problems yet again as he accepts a series of literary gigs that send him on a zigzagging adventure across the US. Less roves across the “Mild Mild West,” through the South and to his mid-Atlantic birthplace, with an ever-changing posse of writerly characters and his trusty duo – a human-like black pug, Dolly, and a rusty camper van nicknamed Rosina. He grows a handlebar mustache, ditches his signature gray suit, and disguises himself in the bolero-and-cowboy-hat costume of a true “Unitedstatesian”… with varying levels of success, as he continues to be mistaken for either a Dutchman, the wrong writer, or, worst of all, a “bad gay.”

Hate You Later by Ciara Blume