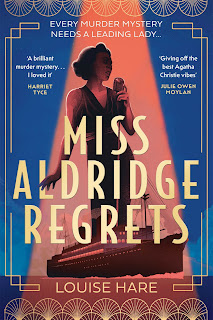 London, 1936. Lena Aldridge wonders if life has passed her by. The dazzling theatre career she hoped for hasn’t worked out. Instead, she’s stuck singing in a sticky-floored basement club in Soho, and her married lover has just left her. But Lena has always had a complicated life, one shrouded in mystery as a mixed-race girl passing for white in a city unforgiving of her true racial heritage.

She’s feeling utterly hopeless until a stranger offers her the chance of a lifetime: a starring role on Broadway and a first-class ticket on the Queen Mary bound for New York. After a murder at the club, the timing couldn’t be better, and Lena jumps at the chance to escape England. But death follows her onboard when an obscenely wealthy family draws her into their fold just as one among them is killed in a chillingly familiar way. As Lena navigates the Abernathy’s increasingly bizarre family dynamic, she realizes that her greatest performance won’t be for an audience, but for her life.