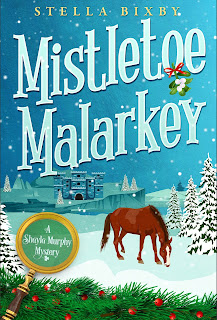 Other Available Books by Stella Bixby

About Mistletoe Malarkey by Stella Bixby

They’ve been dating more than a year. They practically live together. Now, Shayla’s meeting his family for Christmas. In Ireland. Seamus is a park ranger, shares an apartment with three other guys, and drives a beat up pickup truck. How would Shayla have known he was practically Irish royalty? When they arrive at the airport and are bombarded by camera flashes, Shayla’s insecurities move closer and closer to the surface. An old girlfriend, a creepy uncle, and an entire town are on hand for a getting-to-know-you dinner party. Everything is going well until someone ends up dead. The Gardaí want Shayla to stay out of it. She may be a police officer in the United States, but she has no jurisdiction in Ireland. Too bad, she can’t seem to keep from stumbling onto clues everywhere she goes.