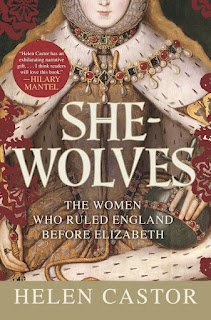 About She-Wolves by Helen Castor

With the death of Edward VI in 1553, England, for the first time, would have a reigning queen. The question was: Who? Four women stood upon the crest of history: Katherine of Aragon’s daughter, Mary; Anne Boleyn’s daughter, Elizabeth; Mary, Queen of Scots; and Lady Jane Grey. But over the centuries, other exceptional women had struggled to push the boundaries of their authority and influence—and been vilified as “she-wolves” for their ambitions. Revealed in vivid detail, the stories of Eleanor of Aquitaine, Isabella of France, Margaret of Anjou, and the Empress Matilda expose the paradox that England’s next female leaders would confront as the Tudor throne lay before them—man ruled woman, but these women sought to rule a nation.

Six Days With My Celebrity Ex by Kimberly Krey

Shadows of a Witch by D.N. Leo