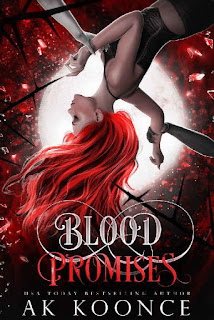 About Blood Promises by A.K. Koonce

Blood Promises is book one of a spicy why choose, dark fantasy romance series with psychopathic possessive men, k!ller vampires and even brooding Fae Kings.

I wanted him… I wanted him almost as much as I wanted to escape him. Last night I was in his arms. I would have gone home with him if only he’d asked. Instead I just woke up alone in his bed… chained to it. He says I’ve been promised to his father, the Vampire King. But, not to worry, I won’t have to marry him. I’ll only be fed to him, slowly drained each day until I’m bled dry. I’m at the mercy of three of the most demented men in the Kingdom. They claim to be my protectors until the King is ready for me. They rip men to shreds simply for looking at me. They must protect the King’s Promise above all else. They protect me, save me, want me… but they can never-EVER-taste me. It doesn’t take long before all three of them break that single rule. And they’re not ready to stop at just one taste.

Closer Than Blood by Gregg Olsen

Before We Were Strangers by Renee Carlino