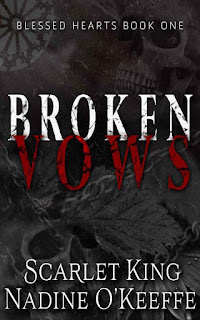 Two rival gangs. A marriage meant to unite them. A single word to start a war. Siobhán Branigan has spent her whole life devoted to her family, given everything to be the perfect heir to her father’s gang. But what happens when it’s still not enough? She refuses to sign her life over to the enemy, to be used as nothing more than a pawn to unite the rival families. Marrying Oisín, the heir of the Cavanaugh gang, may be the answer to her father’s problems, but she’d rather sell her soul than marry a man she barely knows.

And so, instead of saying I do, she runs. Nessa Tobin has given her all to crawl out of the gutter. She’s worked hard to earn her place as the enforcer for the Cavanaugh’s gang. She’s learned to be fierce. Brutal. Feared. But what happens when it’s still not enough? She refuses to put her life in the hands of her enemies, to give the girl who ruined everything the power to take her down with her. So now, she’s on the hunt. As their families teeter on the edge of war, Nessa and Siobhán must decide: where do their loyalties lie? And what happens when your enemy becomes more trustworthy than the people you’ve spent your life devoted to?