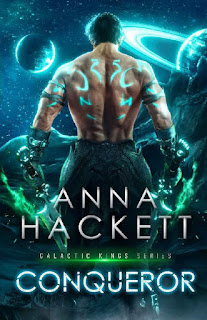 Other Available Books by Anna Hackett

About Conqueror by Anna Hackett

After two years of alien captivity, Evie is free, but her captors have changed her. Now struggling to control a terrifying new power, her only hope is one formidable, dangerous alien king. Logistics manager Evie Mason is no longer a prisoner on an alien space station, but she’s far from Earth, suffering nightmares, and fighting to ignore the growing power inside her. She just wants to be normal, but when she comes face to face with the intoxicating ruler of the planet Taln, normal isn’t an option. He speaks to the power inside her, and ignites a fierce desire she’s never felt before.

Conqueror Graylan Taln Sarkany is the king of Taln and its people, who can control the geological forces of their planet. He’s dedicated to protecting Talnians from his evil father and uses his immense power to command the rocks, soil, and earthquakes. But Gray must always keep a part of his power leashed. The part that’s too volatile, too enormous, too dangerous. Then one small, tough woman from Earth threatens all his control.