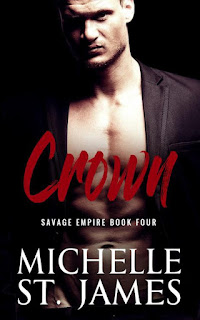 About Crown by Michelle St. James

Kira Baranov always wanted to be leader of the bratva. But not like this.
Marrying Lyonya Antonov was a business decision — until she fell in love. Now Lyon’s been taken prisoner by a shadowy enemy, and Kira must orchestrate a rescue to save the man she loves.
Lyon Antonov swore he’d do anything to protect Kira and their unborn child.
Then an army of deadly Russian criminals took him prisoner. Beaten and bloodied, he thinks only of escape — and revenge against those who dared to separate him from the beautiful, maddening woman who has become his world.
But escaping his Russian captors is just the beginning. Leaving a trail of bodies in his wake, Lyon discovers someone else has been pulling the strings all along.
Now he and Kira have to choose: the empire they’ve sacrificed to control — or the love of a lifetime?