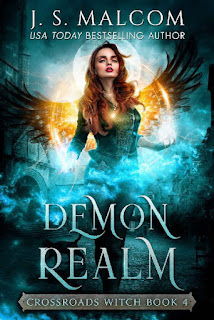 About Demon Realm by J.S. Malcom

Just when we thought the threats we were facing might finally be gone, a magical attack forces us to realize we couldn’t be more wrong. As if the supposed “Pureblood” witches would stop trying to take down magical mutts like us. Among them these days is our old friend, Zachary, and if he’s behind the attack he’s right in thinking we haven’t forgotten how he betrayed us. Which may be why he decided to strike first. Like they say, there’s no animal more dangerous than one who fears itself cornered.

As if that isn’t enough to have me stressing out completely, I take on a mission of mercy—because, you know, that’s what the good guys do—taking me back to the one place to which I swore I’d never return. Namely, the demon realm, this time with Lolo, my very best cambion friend. Like I should be surprised when I find myself once again trapped. Because, hey, that place is basically Hell. But I don’t end up ensnared in any way I ever could have imagined, as I end up being forced to play the part of an official bounty hunter serving the crown. To keep me in line, the death priests bind my soul to that of another. He’s called a Sentinel and his job is to make sure I do mine, which means hunting the very same souls I came to protect. Of course, he doesn’t know who I truly am, and if I don’t manage to keep my identity secret I sure as hell won’t be leaving Hell again. At least, not alive. Which means the same, of course, for Lolo and those we promised to save.