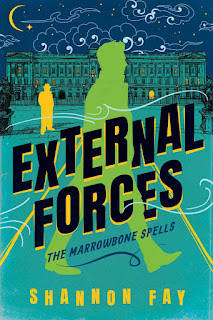 About External Forces by Shannon Fay

A mage for the British royals matches wits with a power-mad old foe in a beguiling novel of enchantments and daring by Shannon Fay, author of Innate Magic. London, 1958. By crafting magical outfits for his friend, Princess Katherine, cloth mage Paul Gallagher is getting ahead. It’s not a seamless path. Not since the Virtuis Party came to power. The far-right faction is using criminals to create a protective barrier around England. The enchanted uniforms the prisoners wear may beget a demand for mages, but using luckless convicts as tools for warmongering reactionaries isn’t Paul’s dream for cloth magic.

His road to success takes an even darker turn when the unexpected death of a member of the royal family plunges the country into chaos. The Virtuis Party is rising, its mysterious puppet master is gaining control, and Paul and his allies are prepared to do anything to protect the princess, the throne, and ultimately, the soul of the country. That means falling back on the innate magic Paul dreads using again. It’s illegal, dangerous, and so potent it can raise the dead. But as the fate of the entire nation hangs by a thread, dire times call for extreme magic.

Devil in Disguise by Aleatha Romig