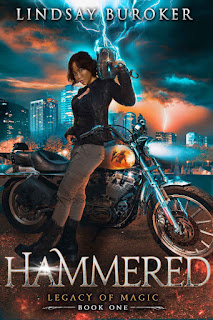 About Hammered by Lindsay Buroker

Seattle native Matti Puletasi has the strength of a bear, the stamina of an ox, and a magical hammer inherited from her dwarven mother. She’s happy renovating homes and occasionally thumping bad guys until she learns of a mysterious artifact hidden under the house she’s working on. Everybody from humans to orcs to werewolves wants it, and they’re willing to kill to get it. Things go from bad to worse when someone frames her for murder.

The only person interested in helping her is a haughty elf assassin from another realm. He’s handsome, powerful, and deadly, but he’s got an agenda of his own. She dare not trust him—or be attracted to him. But if she can’t clear her name, the assassin will be the least of her worries.

Nerdy or Nice by Sabrina Stark