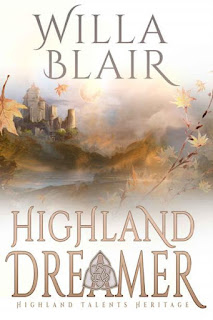 About Highland Dreamer by Willa Blair

Tavish Lathan sees the future in his dreams. Because he lacks a full command of the talent he inherited from his mother, his predictions don’t always come to pass. So when death clouds the destiny he foresees for a beautiful visitor to the Lathan keep, Tavish prays this foreshadowing will be one of his unfulfilled visions.
After her seer’s sense warns of danger, Yvaine’s begs her parents to allow her to accompany them to a gathering of clan chiefs at the Aerie. Her father has his share of enemies, and her powers of prophecy are often less than reliable, so her only hope of seeing the threat in time to protect him is to remain close at hand.
Tavish’s visions fail to predict the ardent feelings he develops when he meets the doomed lass. His efforts to protect Yvaine from her fate cause her to misunderstand his intentions. She believes that he is part of a conspiracy to kill her father. When the real danger appears, can they trust each other—and their burgeoning abilities—enough to keep their dreams of death from coming true?