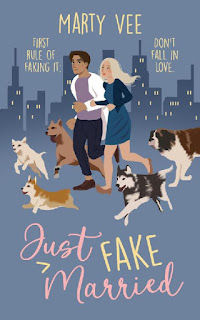 Two lies and a fake marriage later… Veterinarian Owen could blame being shy, but telling a donor at the dog shelter he works at that he’s married was… a mistake. Now, he has to figure out how to get out of the lie. And it doesn’t help that he also told Emmeline, the woman he can’t stop thinking about, the whole misguided tale. Emmeline can’t believe Owen, possibly the hottest man alive, lied about his marital status, but then when her client refuses to work with an unmarried woman, she did the exact same thing. She’s desperate to keep her falsehood quiet as she figures out how to not become the saleswoman who made up a husband in her very male-dominated field. When Emmeline’s and Owen’s worlds unexpectedly collide, they need to double down on their stories or watch them explode in their faces. As the deception grows so does their attraction, but can their relationship survive under the weight of so many lies?

Protected By The BodyGuard by Bella Lane

Her Pack Protectors by Laura Wylde