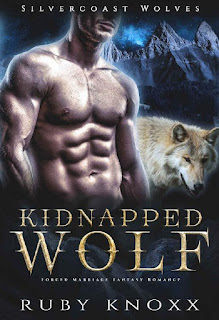 About Kidnapped Wolf by Ruby Knox

He dragged me to his kingdom and forced me to marry him.
He says the mark on my hand means I’m his, that it binds me to him.
But I don’t want our supposed marriage pact, don’t want to sleep with the enemy.
I’m a fighter, and I’ll fight him with everything I have.
He says he’s being merciful by marrying me instead of killing me.
But I’ve seen his coldness, I know what he’s capable of.
The wolf inside of him might think he’s found his mate.
But I will never love his ice cold heart.