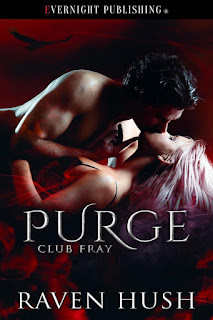 About Purge by Raven Hush

Killian du Pont is a regular Dom and manager at Fray, Melbourne’s premiere BDSM shifter club, but he only wants to play with one girl. A girl who craves pain over pleasure, soothing his beast, a gray buck kangaroo.
Problem: she isn’t his.
Emu shifter Lux belongs to no one. Her uniform consists of a collar she bought for herself, signature dark denim and a fluff of her own shifted feathers. Her loyalty belongs to her boss but her attention is drawn to Killian who irritates her with his overprotective streak but attracts her with his personal brand of dominance.
When Killian breaks through Lux’s edgy exterior, he discovers trauma and courage, but inner strength isn’t her weakness. Lux’s past haunts her to the club’s doorstep. Killian doesn’t know where Lux stands when Fray is threatened or if he’ll lose her just as he’s found her.