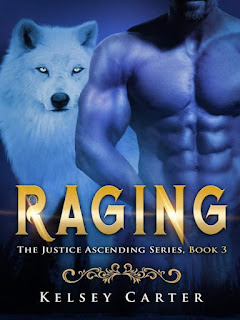 About Raging by Kelsey Carter

Nate Lowell assumed that Diana Moonbear had been falling for him ever since he’d moved into her penthouse so he could recover from his injured leg. She’d gone from his rescuer, to friend, to lover. He’d even imagined she might become his wife.
A few callous words from Diana about her motives in starting the affair make him walk out, back to his house to lick his wounds and curse himself for ever being stupid enough to think a classy woman like her could ever want a disabled guy like him.
Nate tries to move on with his life, but his affair with Diana isn’t something he can forget easily. A series of shocking events draws them together once more. Nate is forced to fight for his life, and his beloved’s, in a winner-takes-all battle in the werewolf glade.
The closer they get, the more he dares to dream she might actually fall in love with him at last, rather than just in lust….