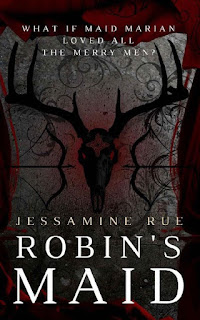 About Robin’s Maid by Jessamine Rue

Threatened with a marriage she doesn’t want, Lady Marian strikes a deal with Prince John and the Sheriff of Nottingham. Spy on the dastardly bandit Robin Hood and his band, learn their secrets and find their hiding places, and then turn them in to the law. In exchange, she’ll be a free woman, with her own property and full control over her future.
Dressed as a boy, Marian joins the outlaw band. But she finds herself drawn to the enigmatic Robin, the dashing Will Scarlet, the darkly brooding David of Doncaster, and the handsome yet chaste Friar Tuck. The more she learns of Robin’s true identity, the less certain she is about betraying him.