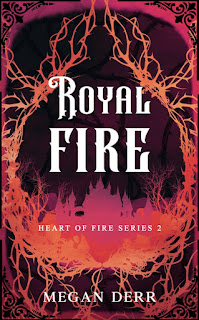 About Royal Fire by Megan Derr

In the aftermath of the attempted assassination of Prince Tevra by his own family, Najlah and Barkus are assigned to his protection. While playing bodyguard to a measly human is far beneath Najlah’s lethal skills, he can’t deny he’s intrigued by the man whose blood is now sunk into his very bones, a man who proves to have magic literally carved into his skin.

Rather than back down in the face of failure, Prince Tevra’s family only turns more ruthless, willing to pay any price to obtain the war and bloodshed they’re so desperately seeking. But they didn’t count on facing a dragon born in a volcano, a wolf forged in snow and ice, or Tevra himself, who has plenty to say about the family who ordered him stabbed to death in his own bed.