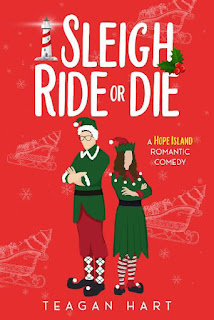 About Sleigh Ride Or Die by Teagan Hart

Two ride-or-die besties are living their best life in nerdy, platonic bliss. But a dare gone wrong lands them in a holiday dating game that lights a fire where only friendship had been before. Will they stay in the friend zone or end up unwrapping each other on Christmas morning?
High school science teacher Abby Locke has everything she needs; a job she loves in her kooky home town, an apartment she loves with her bearded dragon Mr. Burns, and a BFF next door that she loves . . . as a friend.
Tall, handsome, and nerdy Aaron Burns moved to Hope Island three years ago after a lifetime of feeling like a ship lost at sea. He’s finally found an anchor on Hope Island with Abby and a town so quirky and quaint that he could never imagine wanting to leave.
But when a dare lands them in the obnoxious Santa’s Singles holiday matchmaking game, their ride-or-die friendship is put to the test. As they march through a series of hilariously bad dates, their fear of losing what they have with each other begins to grow. . .along with something else.

The Immortal’s Guide to Supervillainy

Sincerely, Up Yours by Penelope Bloom