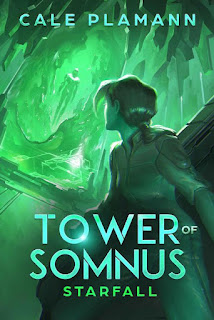 About Starfall by Cale Plamann

Conspiratorial conflicts boiling over. Allies pushed into the mix. The stars are spilling war onto Earth.
Kat revealed the Stallesp plot: the aliens never meant to abide by rules laid down by the Galactic Consensus, instead choosing to ask forgiveness rather than permission for interfering with Earth and its corporations. Now she is fighting a lonely war against the invasion as she tries to buy enough time for help to arrive.
Her allies are gone or preoccupied, forcing her and the few friends she’s made to try and root out the invaders without formal support. As her investigation heats up, revealing a situation worse than Kat ever could have expected, she needs to confront an unpleasant fact: not all of humanity’s enemies are aliens.
Now Kat is racing against time, both in and out of the tower. Despite her skills, magic, and allies, her best may not be enough.