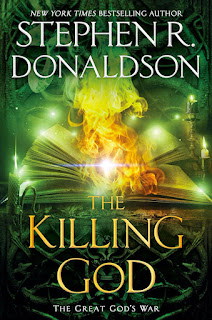 About The Killing God by Stephen R. Donaldson

Two kingdoms, ancient enemies, must stand alone against an implacable invader in the masterful conclusion of the Great God’s War epic from the New York Times bestselling author of the Chronicles of Thomas Covenant.
They are coming.
The kingdoms of Belleger and Amika had been fighting for generations. But then they learned of a terrible threat moving through them to destroy the Last Repository, an immense hidden library. To face this greater enemy, King Bifalt of Belleger and Queen Estie of Amika allied their lands and prepared for war.

The Lost Tower by Irina Shapiro