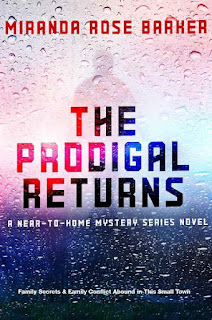 About The Prodigal Returns by Miranda Rose Barker

They say small towns conceal big secrets—Holly’s learning the truth may be far more sinister…
Moving to a coastal town got Holly away from the big city and corporate jobs. Little does she know she’s landed right in the middle of a mystery. As she pieces together information from the locals about the very rich Mongomery clan and their big house on the hill, the patriarch of the family dies.
The suspicious circumstances regarding his death and rumors of the old man being cruel and arrogant paint a clear picture in people’s minds, despite the death being ruled natural causes.
When an estranged son of the dead man shows up in town, Holly meets the young man and discovers the rumors about him are far from accurate. Desperate to dig deeper, Holly continues doing whatever it takes to learn more, but when the patriarch’s cause of death is changed to murder, she learns there might be more to her new acquaintance than meets the eye. One thing is for sure – Holly will do whatever it takes to learn who killed Daniel… and uncover any other secrets the family is hiding.

Under the Spotlight by Megan Mayfair

The Opal Embers by William Hastings