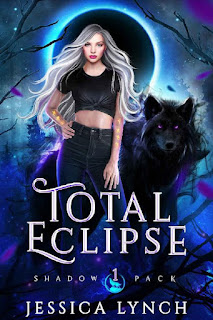 About Total Eclipse by Jessica Lynch

I should know. After all, I used to be part of the pack until a quirk of fate had me turning my back on them when it became clear that I was just too different from my fellow packmates.
So what if I was the only shifter with white hair? At least I matched my wolf. When anyone wondered why I didn’t have the tell-tale purple eyes of our kind, I shrugged and said it was glamour. But then the glowing runes appeared on my skin… and, yeah. Not even my relationship to the pack’s Alpha could keep the rumors from swirling.
That’s when my uncle dropped the bomb: unlike the witch-shifter hybrids that make up the Shadow Pack, I don’t have any witch blood in me. I’m part celestial—one of the cursed Nephilim—and the biggest threat to my pack.