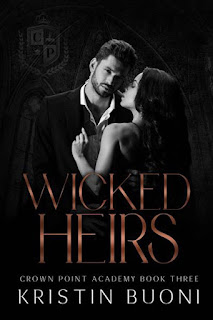 About Wicked Heirs by Kristin Buoni

Wicked Heirs is a DARK high school bully romance with themes that some readers may find disturbing. It is the final book in the Crown Point Academy trilogy. They haven’t won yet…

Kinsey
Tensions have reached a boiling point between me and the wicked heirs of Crown Point. My search for the truth has uncovered their dark, twisted conspiracy, and now they’re fighting back.
They’ve taken me and they mean to silence me. Permanently.
I can’t save myself this time, but I still have one last hope for survival.
Jax.

Jax
When the enemy came for Kinsey, I wasn’t ready… but I’m ready now.
The need for vengeance and justice is burning me from the inside out.
I’ll hunt down these so-called elites one by one. Topple them from their thrones. Make them pay for their sins. If anyone else gets in my way, I’ll destroy them too.
Anything to save the girl I love.
Anything.