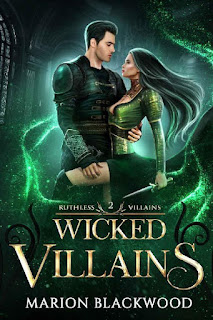 About Wicked Villains by Marion Blackwood

After finishing their mission together, both Callan and Audrey find themselves in a position they did not expect. Their feelings towards each other have changed. And so has the power balance. While trapped in an entirely new situation, both of them will have to sort through their tangled emotions and figure out how to handle their complicated relationship.
At the same time, the other dark mages are on the warpath. Some might be open to negotiating a deal, but others are preparing for an outright fight. In order to avoid a direct confrontation, Audrey and Callan have to work together to broker a tenuous peace. At least until the two of them are ready to make their own moves.
Enemies are circling them like wolves, waiting for them to slip up. But the greatest danger they face is not the enraged heroes or the other dark mages. It is their feelings for each other.

A Wish for Winter by Viola Shipman

The Vampire’s Search For A Queen by Nikki Grey