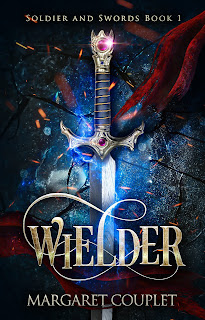 About Wielder by Margaret Couplet

Hundreds of years after a race of magical beings called dindeary have taken over most of the world Corporal Clark Jameson is graduating from the Human Empire’s military academy after four years of grueling work. As a common born orphan from a small town too close to the border for anyone’s comfort Clark knows that he doesn’t have many prospects until, on the night before his future unit is to be decided he meets a strange pair of men who belong to the infamous Squad 42: Adam Milson, a sexy blonde that makes Clark’s blood run hot, and Harry Browning, the mysterious swordsman carrying one of the 13 magical swords which the dindeary will do anything to reclaim.

He never expected to see them again, especially considering Adam Milson was the heir to one of the most wealthy provinces but the next day he is called before all three of the members of Squad 42 and is offered the opportunity to try and wield Harry’s sword, Linsgarum. But Clark was a commoner, he couldn’t wield a sentient blade that burned any who were deemed unworthy, could he?

World Of Terror by Connor Strong