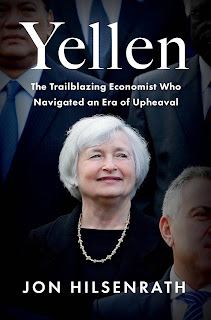 About Yellen by Jon Hilsenrath

An engrossing and deeply human chronicle of the past fifty years of American economic and social upheaval, viewed through the consequential life of the most powerful woman in American economic history, Janet Yellen, and her unconventional partnership in marriage and work with Nobel Laureate George Akerlof.

At the dawn of the 21st century, many of America’s leaders believed that free trade, modern finance, technology, and wise government policy had paved the way for a new era of prosperity. Then came a cascade of disasters—a bursting tech bubble, domestic terror attacks, a housing market implosion, a financial system crisis, a deadly global pandemic. These events led to serial recessions, deepened America’s political fractures and widened the divide between those best off and everyone else.

An Innocent Crush by Cassi Hart