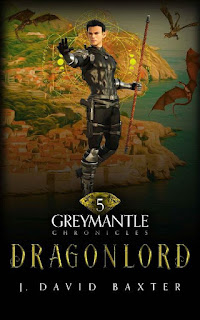 About Dragonlord by J David Baxter

The fifth novel in J David Baxter’s epic portal fantasy series, the Greymantle Chronicles.
Now an Earl and thrust into the middle of kingdom politics, Nate must support his king while avoiding assassins and winning the tournament that will vindicate all his hard work. At the same time, he will need to solve the mystery of how he was brought to Greymantle and find a way to stop the Blood God’s attacks once and for all.
Set in Greymantle, a unique world of swords and magic that is medieval in flavor but seen through the lens of a modern college student from Earth, the Greymantle Chronicles are an epic fantasy series on a high magic fantasy world where technology and science never existed. Yet, cities are cleaner, banking is done with magic tokens, floating carts are used to haul freight, and magic is a science in its own right.