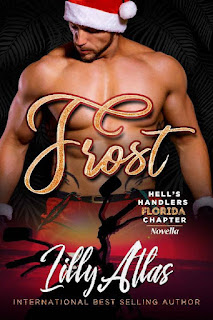 About Frost by Lilly Atlas

Rachel has spent her life without family and watching others from the sidelines due to a series of unfortunate and traumatic events. She longs for the unbreakable connection only blood can bring. When she learns she has a half-brother living halfway across the country, she wants nothing more than to meet him. Even if he is the president of a motorcycle club.

Frost earned his road name on account of his less-than-fuzzy personality. After years of drifting around the country alone and lonely, he yearns for the strong family bond offered by the Handlers. But first, he needs to make it through the prospecting period, and acting like his aloof, antisocial self isn’t the way to do it. Neither is lusting after his president’s long-lost sister. But one of those things he can’t seem to control.