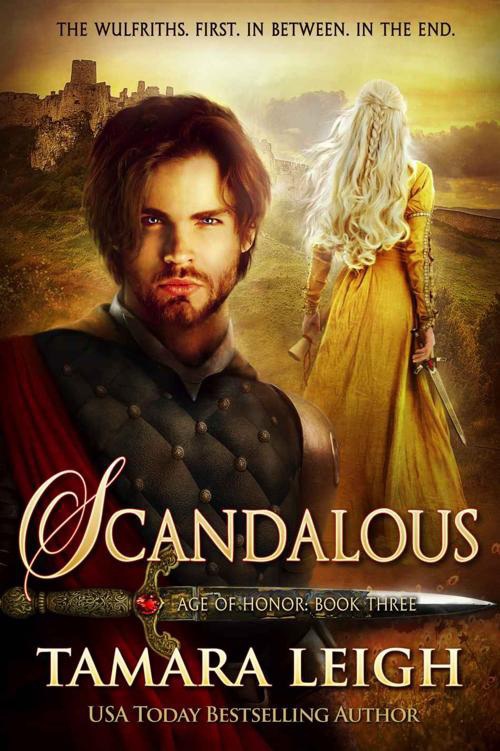 About SCANDALOUS by Tamara Leigh

THE WULFRITHS. FIRST. IN BETWEEN. IN THE END.

The late middle ages. England’s king seeks to recover the French lands of his ancestor William the Conqueror and claim the continental throne. France’s king aspires to seize the remainder of his royal vassal’s lands and retain his throne. So begins the Hundred Years’ War, the backdrop against which the formidable Wulfriths of the AGE OF CONQUEST and AGE OF FAITH series continue their tale.

Lady Adelaide Soames of scandalous repute counts the days, months, and years until justice is served. At last, King Edward’s masked ball not only brings her face to face with the nobleman who ruined her sister but the sheriff she deems his accomplice. When she exposes the culprit, the resulting spectacle finds her teetering on the edge of the king’s mercy. And stunned when the sheriff who could have saved her sister offers a solution to the problem of a lady no longer welcome at court. Certain he expects her to reject what can only be a show of penance, she accepts. Then just like that, the scandalous Swan of Lexeter finds herself hopelessly ensnared and justice deferred. Yet there could be good in it. If she can put growing feelings for this man ahead of her desire for revenge.

Sheriff Percival D’Arci is diligent in enforcing the law upon Wulfenshire—though not always. Years ago, vexed at being awarded an office requiring more time than he could spare, with undue haste he investigated a lady’s assault on her sister’s guardian. And mistakenly gave greater weight to the testimony of a respected nobleman than a woman known for stirring trouble. Now, burdened by a tragedy he might have prevented, he is prepared to give Lady Adelaide her due—and even more when guilt collides with impulse and the penance he offers is not rejected. Might his resolve to bring to justice the nobleman who destroyed her sister ease her bitter heart? Or have they consigned each other to a life of discord? And how is he to keep the lady to whom he is increasingly drawn from taking matters into her own hands?