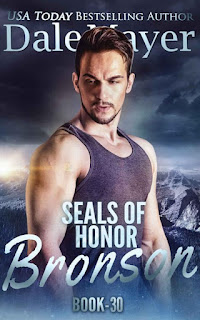 Other Available Books by Dale Mayer

About SEALs of Honor Bronson by Dale Mayer

Training in underwater recovery techniques, Bronson didn’t expect to recover a body, particularly one with a knife embedded into a diver’s back. Down in Mexico, often anything goes, but he’s been on many dives in his life and has been through a lot of this country, yet at no time had he seen this scenario.

Her missing brother being found sends Robin deep into grief and guilt. Her brother had been much older, living a risky lifestyle on the fringe of society in a small coastal Mexican town. She’d arrived six months earlier in an attempt to help him get his life together.

Finding out what happened is paramount. Yet, as the twisted tale unravels, the betrayals and secrets finally come to light. Bronson and Robin must protect themselves, before the wrong person finds out exactly what they’ve discovered.