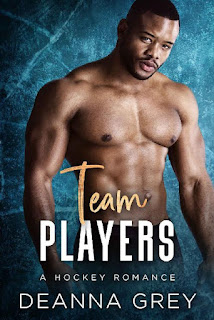 About Team Players by Deanna Grey

Aderyn
Resident playboy, Samson Morgan, thinks he can beat me at my own game.
The hockey captain truly believes he can stop playing the field for longer than I can start having one-night stands.
Okay, sure, historically I’m known for being an all-in, ask-to-be-your-girlfriend-on-the-first-date romantic. But being a player isn’t that hard. And I came to Mendell University to win. Whether that’s on the ice or off.
Morgan doesn’t realize it yet but he’s finally met an opponent who can take him down.

My bet with the women’s hockey team captain feels like an easy win.
Three months pretending to be a one-woman kind of man? Easy…scary easy, actually.
Somewhere along the line, I start taking my role too seriously.
This semester isn’t the time for me to get distracted from my main goal – ensuring my team gets a fair shot this season.
But Aderyn Jacobs consistently makes me rethink everything I’ve ever wanted. I’m in danger of losing something far bigger than our bet.