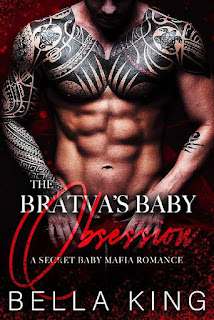 Other Available Books by Bella King

About The Bratva’s Baby Obsession by Bella King

I was warned to stay far away from Yuri Zima,
Despite his menacing gaze, dominating hand, and abs sculpted from stone.
Despite the fact that he’s utterly obsessed with me,
And despite the unfortunate reality that I’ve already ended up in his bed.
Twice.
Now, I’m trapped in a dangerous game of power and seduction,
Clinging to lost hope and borrowed time,
And he intends to claim every last second of it.
But it goes deeper than that.
Much deeper.
Because Yuri isn’t the man he claims to be,
And my most twisted nightmares pale in comparison to our new reality together.
Every smile hides betrayal,
Every kiss, a deadly secret,
Every touch, the potential to ruin me forever.
But it’s already too late to turn back,
Because I’d due in nine months,
And Yuri Zima is the father.