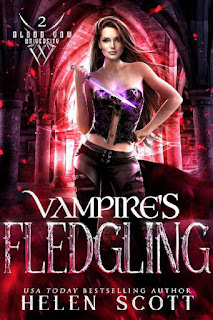 About Vampire’s Fledgling by Helen Scott

She survived the vampire attack but at what cost?
Becoming a feeder isn’t something Cordelia ever expected to do in her life, but sometimes you’ve got to do things you never thought possible to survive. Even worse, she was kidnapped because of who she is feeding.
Rook isn’t just the vampire she’s feeding though, he’s her lover as well, and despite the attack she isn’t willing to let her fear control her. Plus, the money she gets from feeding him is more than she ever dreamed of, and it’s the only thing making it possible for her to go to school.
When she discovers who Rook really is, she knows that there’s no chance of a real relationship between them. But every time she feeds him she feels their connection growing deeper and herself changing in unexpected ways.
If she keeps going will she still be human anymore? Or will she be something else entirely?