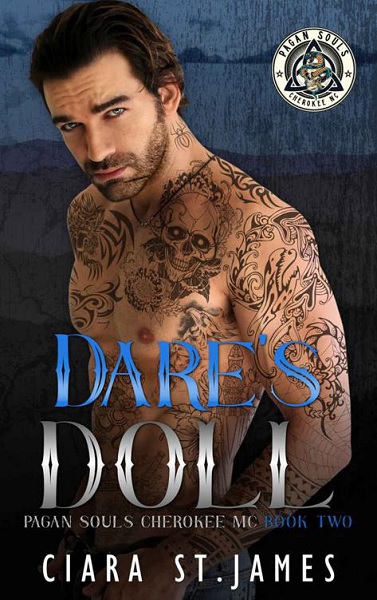 Dare has been proud to be a member of the Pagan Souls MC in Cherokee for close to two decades. He has good friends he calls brothers and a life that brings him a lot of happiness. It’s brotherhood that has him and a few of his Cherokee brothers answering the call for assistance from another chapter of Pagans. He has no idea that by doing so, he’s about to step into a whole different and new path in his life.

Joli is thrilled to be working a job she sees so much potential in and living close to the one family member she’s proud to claim, her cousin, Chaos. He’s a member of the Pagan Souls in Lake Oconee. However, after a short time there, trouble finds her and the Pagans call in their other chapter to help them resolve it.

The first meeting between Dare and Joli ends in a totally shocking moment. Words are said, and a chance is taken. Fast forward to Joli spending time in Cherokee. She’s deciding whether she’ll take Dare up on his offer or not. While she does, her life is still on hold because of the trouble that found her in Lake Oconee.

A run-in with an old acquaintance of the club makes Joli think long and hard about her future. As the story about this acquaintance unfolds more, changes are made. Only when those are expressed to the one in question, there are repercussions that may end up costing Dare his woman. Only time and a grand gesture will determine if this biker ends up having a happily ever after with Dare’s Doll.