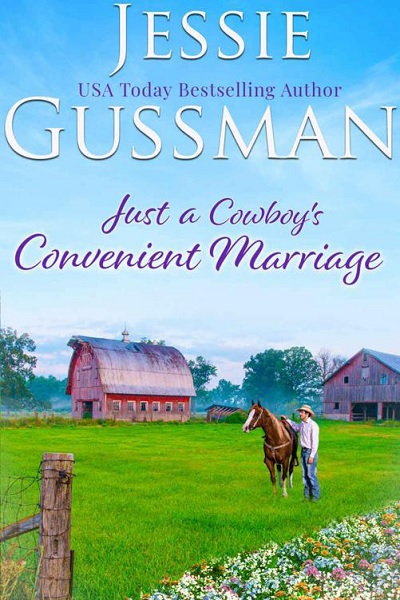 Other Available Books by Jessie Gussman

About Just a Cowboy’s Convenient Marriage by Jessie Gussman

A man who lost everything.
A woman squatting on a property that’s not hers.
An aunt who suggests a marriage of convenience.
When Smith Long strides into his new hometown, he doesn’t expect to get bowled over by a woman chasing her cow whom she claims has fallen in love with a pig. Doesn’t every small town have that one crazy person?
He’s not laughing later, though, when his aunt informs him that in order for him to receive the old, rundown property she’d promised him, he has to marry the crazy woman he’d hoped to never see again.
Abrielle Adams is squatting on Sweet Briar Ranch and hoping that she’ll get back on her feet before the heir shows up. Wishful thinking since she finds out that the man who’d kept her from catching her cow is the very person she was trying to avoid.
But now Abrielle has been offered the one thing she could really use – half ownership of the Sweet Briar Ranch – and all she has to do is marry a (grumpy, sour, and okay, handsome) stranger.
To both Abrielle and Smith, marriage is more than convenience and a vow is a lifetime commitment. Will they see how much they have in common and decide they need each other?