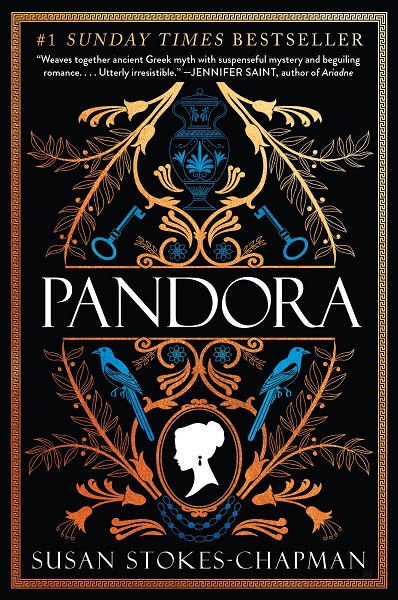 About Pandora by Susan Stokes-Chapman

Prepare to lift the lid on a lush reimagination of the mythological Pandora….Susan Stokes-Chapman’s atmospheric debut, PANDORA, immerses the reader in the dangerous, mysterious world of ancient antiquities with prose that is elegant and teeming with visceral sensory detail. A marvelous debut—imaginative, ambitious, and begging to be savored.” — Sarah Penner, New York Times bestselling author of The Last Apothecary
Steeped in mystery and rich in imagination, an exhilarating historical novel set in Georgian London where the discovery of a mysterious ancient Greek vase sets in motion conspiracies, revelations, and romance.
London, 1799. Dora Blake, an aspiring jewelry artist, lives with her odious uncle atop her late parents’ once-famed shop of antiquities. After a mysterious Greek vase is delivered, her uncle begins to act suspiciously, keeping the vase locked in the store’s basement, away from prying eyes—including Dora’s. Intrigued by her uncle’s peculiar behavior, Dora turns to young, ambitious antiquarian scholar Edward Lawrence who eagerly agrees to help. Edward believes the ancient vase is the key that will unlock his academic future; Dora sees it as a chance to establish her own name.
But what Edward discovers about the vase has Dora questioning everything she has believed about her life, her family, and the world as she knows it. As Dora uncovers the truth, she comes to understand that some doors are locked and some mysteries are buried for a reason, while others are closer to the surface than they appear.
A story of myth and mystery, secrets and deception, fate and hope, Pandora is an enchanting work of historical fiction as captivating and evocative as The Song of Achilles, The Essex Serpent, and The Miniaturist.