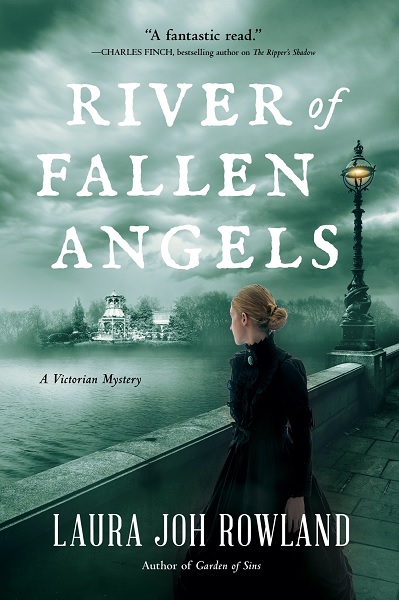 About River of Fallen Angels by Laura Joh Rowland

Award-winning author Laura Joh Rowland is back with the seventh in her critically acclaimed Victorian mystery series in which Sarah Bain Barrett is pitted against a true-crime serial killer who may have ties to Jack the Ripper.
London, April 1891. When the severed torso of a woman washes up on the bank of the river Thames, London believes a serial killer from the past has struck again. Crime photographer and investigator Sarah Bain Barrett is on the scene with her friends Mick O’Reilly and Lord Hugh Staunton. This is their chance to solve a grisly cold case and deliver a monster to belated justice, with help from Sarah’s husband Detective Sergeant Thomas Barrett; her sister Sally Albert, an intrepid newspaper reporter; and Hugh’s psychologist, Dr. Joshua Lewes, who’s a pioneer in the new science of criminal profiling. But the opportunity brings troubles galore: Sarah and her husband can’t agree on what direction their inquiries should take. Barrett favors concentrating on two shady characters he knows from his days a a patrol constable in Whitechapel, while Sarah suspects the charismatic leader of a polygamous religious sect from which at least one woman has gone missing. Their discord threatens not only the investigation but their marriage.