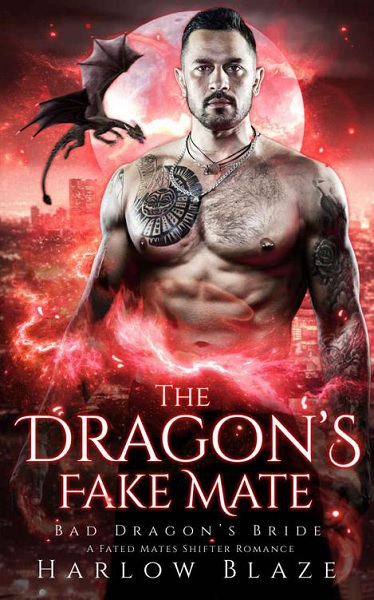 About The Dragon’s Fake Mate by Harlow Blaze

Marrying her brutal dragon-shifter nemesis is the only way to save her friend.
Starla
Starla’s witchcraft hides a terrible secret.
She’s a rare human able to have shifter children. Her magical disguise is the only thing keeping her from becoming a dragon baby factory.
Over her dead body. She has a job. Too many people need her for a stupid destiny to upend her life.
There’s one problem. Her fated mate.
Mars, the dragon shifter’s mercenary, is her own personal demon. Hotter than sin and a stone-cold psychopath, his obsession with her threatens to ruin everything. His presence pushes her magic to its limits. If he gets too close, he’ll figure out their connection.
But when Starla’s friend goes missing, keeping Mars away isn’t an option anymore. There’s only one way to pull off an undercover rescue mission.
A fake honeymoon with the husband from hell.
Mars
The witch is hiding something.
Mars doesn’t know what, but he feels it in his bones. It draws him to her no matter how much he fights, driving him to the brink of madness. He can’t eat, can’t sleep—he even risks losing his position in his clan.
Forcing Starla to marry him is an unorthodox solution, but he’s always been a problem solver. It’s damn hard to escape an interrogation while holding hands and sharing a bed.